To share your memory on the wall of Vernon Foster, sign in using one of the following options:

The gesture that can change the world

The gesture that can change the world

In the parlance of the aviation communityu "flown west" or "gone west" is a pilot's final flight, one to eternity. So it was for Vernon "Vern" Foster, a well known pilot in Enid aviation circle... Read More
Aviation Icon Vern Foster has "Flown West"

In the parlance of the aviation communityu "flown west" or "gone west" is a pilot's final flight, one to eternity. So it was for Vernon "Vern" Foster, a well known pilot in Enid aviation circles as well in his former home state of Colorado. Vern succumbed to old age at 103, though in reality, Vern was never old, never over-the-hill, nor beyond his years for those who knew him.
By the time Vern reached age 96 and quit flying, he had flown for 72 years and logged nearly 25,000 flying hours, or 1,042 days or 2.85 years. In that time, Vern had flown in 141 makes/models of airplanes, and instructed in 114 of them, including instruments and acrobatics. Vern allowed as how he didn't have any trouble flying at age 96, he just had difficulty climbing in and out of the airplane!
Vern was born in a farmhouse near Ness City, Kansas on March 22, 1917. By the time he was in his early teens, the family was enduring the struggles of the depression and the calamity of the early thirties dust storms. But this was also the era of the barnstormers, pilots flying about the nation in old World War I rickety airplanes, often landing in pastures near the small towns along their route, displaying their derring-do, and offering rides for a dollar or less. These pilots and their flying machines were the early inspiration for Vern and his brother Keith to become pilots.
In his 72 years of flying, Vern fulfilled the gamut of what aviation offered. Late in WWII, United Airlines had a contract with the Air Transport Command to furnish pilots. In the year 1945, Vern flew C-54's throughout the Pacific theatre, flying cargo to the air bases as they were liberated, and on the return flights carrying wounded service members back to the States, and later, internees from Japanese prison camps.
Aside from his long career with United Airlines, Vern flew for a charter airline and had his own charter operation and flight academy. In the early years, just prior to being hired by United Airlines in 1943, he served as a civillian instructor for the Army Air Corps.
In 1947 Vern was flying DC-3's at United Airlines. As fortune would have it, he met a beautiful Flight Attendant (then called stewardesses) named Kay Cowan. Vern and Kay were married in August 1947, and left on their honeymoon, in, of course, a small airplane. Two children were to follow, Linda and Bill, the latter a retired Navy pilot. Vern's parents Sada and Malcolm Foster have passed on, as has his brother Keith, a WWII B-24 pilot who was killed in a crop dusting accident. Kay, Vern's wife of 56 years predeceased him, as well as granddaughter Sarah Foster. He is survived by son Bill Foster and wife Judy; daughter Linda Roark and husband Gary; grandchildren, Renee Harvel and husband Paul,; Jerome Roark and wife Whitney; Mathew Foster and wife Marguerite; David Foster and wife Jennifer and Ben Foster.
A gentleman always, Vern was known for his genteel manners, words spoken softly, yet he could produce a quick hearty laugh, even if it was at his own expense. Perhaps these traits were related to his humble beginnings on a Kansas farm? He made many friends over the years, especially throughout aviation, his consummate love. One particular quirk was that Vern loved cowboy boots and wore them as often as he could, swearing they were more comfortable than any other footwear, and, he would add, one could wear two different socks. Vern was known for his remarkable memory. Mention an airplane of the 30's and he would quickly tell you it's engine, and whether you wanted to know or not, all the other airplanes that had the same engine. He could immediately name his first grade teacher, her substitute might take a few seconds longer.
Vern's awards are numerous. He was inducted into the Colorado Aviation Hall of Fame in 1987; named FAA Safety Counselor of the Year for the seven state Northwest Region in 2002; received the FAA Wright Brothers Master Pilot Award in 2011; and was inducted into the Blue Max Society in 1981.
He was a member of the Colorado Pilots Association (Past President); Experimental Aircraft Association; Aurora Masonic Lodge; El Jebel Shrine; Aircraft Owners and Pilots Association; United Flying Octogenarians; Silver Wings Fraternity; Colorado Aviation Historical Society; Flight Instructors Association (Past President); and the Stapelton International Airport Lions Club (Past President).
Vern's memoir "Flying in the Real World" was published in 2015.

Print
A memorial service will be planned for a future date.

We encourage you to share your most beloved memories of Vernon here, so that the family and other loved ones can always see it. You can upload cherished photographs, or share your favorite stories, and can even comment on those shared by others.

Posted Feb 14, 2021 at 05:16pm
He was quite a gentleman and amazing storyteller. We were blessed to know him. Rest In Peace.
Love in Christ, Lynn and Ed Miller
Comment Share
Share via:
B

Posted Feb 14, 2021 at 01:24pm
I remember Vern taking me for a flight two or three times when I was about 12. I could barely reach the peddles but he showed me how to bank, turn, descend. The basics. This led to my taking flying lessons at the age of 15 or 16 and I received my pilot's license.
We had a wonderful visit with Vern on his 100th Birthday. The next morning he came and had a long visit over breakfast with Marna and me.
Even was a special cousin that I admired very much.
Comment Share
Share via:
KD

Posted Feb 13, 2021 at 01:00pm
So proud and honored that Vernon was part of our family. He was loved and admired by all who knew him. He will be missed. 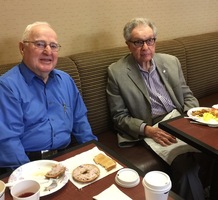 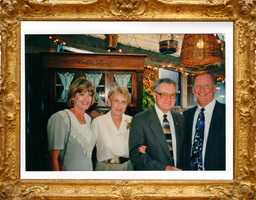 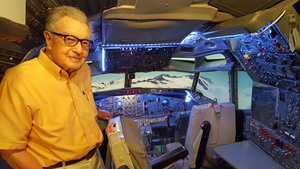 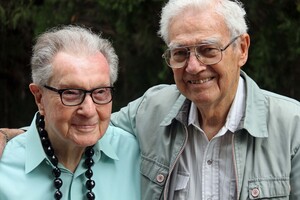